36 members attended our AGM on Tuesday. What a busy night. The formal part took about an hour but there was so much else to do. Maggie Wilde had been invited to come and tell us about the bonnets made for women convicts sent to Australia. Unfortunately, Maggie had recently suffered  a really bad accident and broke her leg, thus unable to attend. She kindly sent a DVD that was  to be shown, for our use. We send her our good wishes. We had already purchased fabric and cut out bonnet brims ready to embroider with hearts and flowers so members just needed to make a choice of a convicts name. 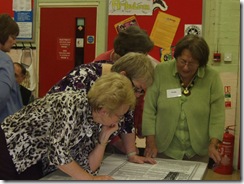 As usual we had our annual competition for “Molly’s Cup”. This year we used the same theme as that of the NW Region, Buildings and Architecture. There were perhaps less entries than usual but I am delighted to say that the Rose bowl was won 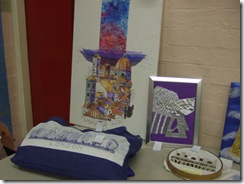 by Margaret Hulton. It is the blue bag at the front. Margaret sent apologies for the night so she will have a formal presentation in October.I will then include a better photograph.

We also collected some of the canvas blocks that members 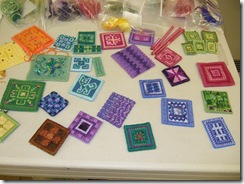 are making for our next installation. They certainly look colourful. BUT we need lots more , so keep going.

The local newspapers had been invited to see and photograph our Bolton Market Hanging. Neither were able to attend so John did the honours. 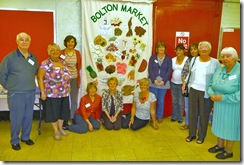 In addition to all this, Barbara showed us the latest designs for Nancy’s Pulpit Fall and asked for volunteers to firstly machine applique the roundels and then for hand stitchers to add details.A meeting of those interested is planned.We plan to use threads donated by Geoff, Nancy’s husband and then we were able to sell quite a lot of fabric and thread donated by Nancy’s husband.

We managed a short Show and Tell, too. Jackie had brought along the two quilts featured in the previous article. Eileen brought photos of her latest ecclesiastical commission. She also shamed us by bringing along details about Bulgaria and her postcard!!!! I will type up this information for our next meeting. No excuses then, for lack of knowledge. Florence shoed us a baby quilt that she has just completed and finally I showed everyone the bowl that I made at summer school, reminding everyone of the great weekend that one has ,at Alston Hall. So as I said at the start,a very busy night.