It was a bit of a worry on Saturday. The final of women and semi final of mens tennis at Wimbledon and a play day. Apologies I know the day has changed its name but I cant remember it. Well I promised Carol that I would attend and take along the lace lavender bags that I had been making so I arrived. It was also gloriously hot and I think many members must have felt like me. Anyhow the hardened few arrived. Barbara assembled the batik stuff and 3 members joined her, Brenda made a book cover Ann made a bag and I made another lavender bag. I had a compromise though, the bag needed filling and the lavender was at home, so I left about 2.00 arriving home in time for both matches. Most of these items are being made to sell at the Triangle in November. More are always wanted.Can i make a plea from gardeners for any spare lavender later in the year. 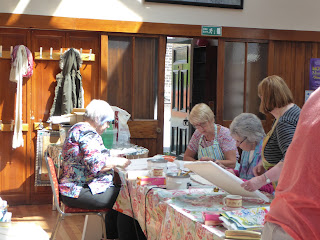 See you at the summer meal tomorrow, 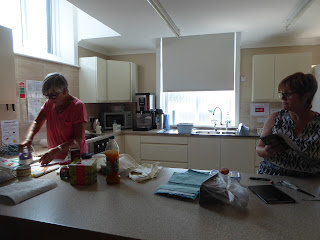 Bags and bookcovers being ironed.
Posted by B.E.G.Stitchers at 9:06 AM