On Monday, I attended the Padiham branch meeting. As acting chair I had asked my friend Barbara Ryall if she would be prepared to do a talk. She had agreed and Monday was the day!!!!

Her talk was called Mix to Match ,an intriguing title and really made me wonder what she would say. We began to unpack her car. It took ages as she had brought so many of her completed embroideries , worksheets and books. 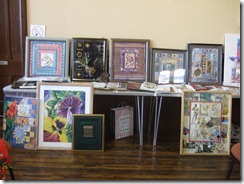 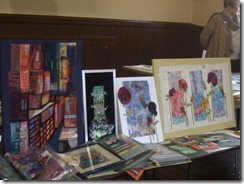 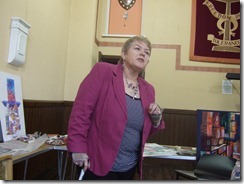 Barbara is a very talented artist and her embroideries really reflect this ability. I know that I am biased, but I was really inspired by her talk. I can never achieve work of her standard but there is always hope. I know that Barbara enjoyed the afternoon and was quite exhausted,answering the many questions posed to her,but delighted by the enthusiasm to which she was met. I know that several members were so inspired that they wanted to race home and begin a new project.