Out and about, Helmshore.

I arrived at an empty car park at Helmshore Mill on Saturday. Upon investigation, I found that I was an hour early. Not a good start but I went across the road to Musberry Fabrics and bought new net for my window.

At 10.00am the activity began. I set up a couple of tables to display work from The Embroiderers Guild. Well to be honest , the majority was mine, but I asked stewards to bring along there work too.

At 11.00 the doors opened on this second “Follow the Thread”event, organised by Patricia from Padiham branch and Friends of Helmshore. I had visited last year and thought it would be a good window to show off our branch.

I was helped by Clare and Glennys on Saturday, Barbara  and Sheila on Sunday. Lesley from Padiham also attended each day and demonstrated dry felting.Thank you all. 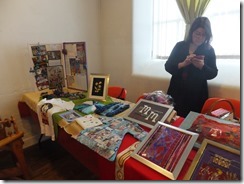 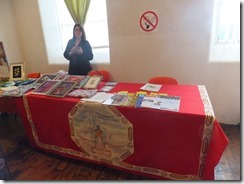 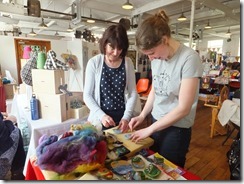 We had a steady steam of visitors, who were generally very interested in our work. I gave out a hundred flyers and took information from several people. We might well receive visitors on Tuesday. I also met several”old embroidery friends” well not old but long standing!!!! and they send best wishes to our Branch.

Don't forget to bring your faces made at Jackie Cs workshop . I promised to photograph and send to her. Also the Gold work from our Jackie and finally a reminder that your competition piece for Molly Cup is due in September.

Only this meeting left before the summer and then of course ,our meal at Ridgmont. I believe that there are still places available for the NW region summer school at Alston Hall so have a think about this too. Clare is hoping to organise more play Days. let her know if you are interested, can suggest a theme or want to share your skills.