Out and about, Padiham

It was the first meeting of the new year, I helped to put out chairs and we actually ran out, it was so busy.Quite a lot of messages and then we were delighted that our Secretary, Joan was able to lead the demonstration. Joan had another nasty operation recently so it was good to see her back on her feet, even if she still needed crutches. So Joan demonstrated a simple technique of rolling paper to make beads not seen before by many of our members. Paper and BBQ sticks had been provided and we then followed some of Joan's interesting designs. 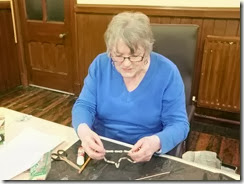 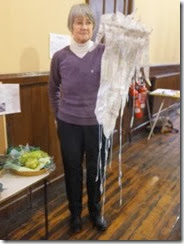 Joan brought along a hanging that she had worked with a variation on the beads. Nan held it for me to photograph. I think there will be a lot of members wearing new jewellery at our next meeting,