Out and about North Lonsdale and Padiham

Last Saturday, Barbara accompanied me to Grange. Well to be precise,the North Lonsdale branch exhibition.We were warmly welcomed and immediately offered a cup of tea and home made biscuits. Glancing around I was delighted to recognise several members and they all came to chat.We were especially delighted to meet one of our former members Mary. However, we were there to see the exhibition. NL is a small branch with about 15 members but the amount and variety of work shown was amazing. I really liked the idea of being able to handle some exhibits. They also had books describing the techniques learned at day schools. I quite fancy adopting this idea. i took photos on my phone but a couple of weeks ago, upgraded to Windows 10. No problem with the system but it wont support my camera or phone. I have bought a reader which is OK for the camera but not yet sorted the phone. SO Sandra i do apologise that there are no photos to assist this record.

On Monday I went across to Padiham. They have changed venue to Higham and also the times, now opening at midday to sew and chat before the meeting which will still start at 2.00. The venue seems to offer excellent facilities. We used many of them as we began our year with a Jacobs Feast. Like Bolton there seemed to be more left at the end than we had started with!!!! The AGM was led by Nan, but it was her last duty as she was retiring and handing over to Sue. I wish Nan well in her well deserved retirement and add good wishes to Sue. Many of the committee are continuing but there is always a space for a willing helper. 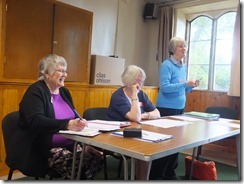 Joan, Wendy and Nan above. 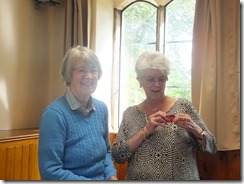 Nan hands over her  badge to Sue. 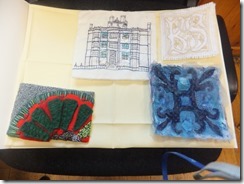 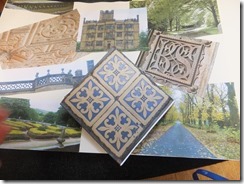 Diane brought along the work in progress for the Chairman Challenge Travelling Book. 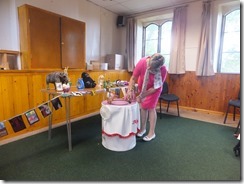 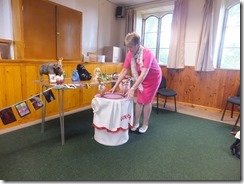 Kathryn then gave a very interesting and amusing talk about Blackpool Branch and hope they had become involved with Blackpool's Treasure Trove.She brought along part of the exhibition but unfortunately could not fit the Blackpool Tower into her car. We might get to see it at the NWR AGM.

I have a very busy week so left about 3.40. It was almost impossible to get from the car park onto the road. The I joined a queue of cars that had been prevented from joining the main road by the police. There were people sitting standing and cheering. I had joined the spectators of the round Britain cycle race.After about 10 mins the Peloton{is that correct terminology} passed by.I managed to catch a few snaps from my car. 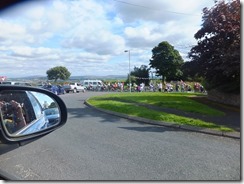 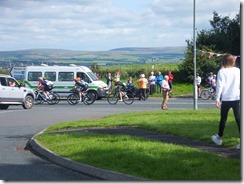 Can you spot me taking the photos? There was then another challenge, turning right onto the main road. I think I waited at least 20 mins for a big enough gap to slip into. However it was a good experience and i managed to do two things on the same day.