In October we had a batik playday which Brenda and Barbara organised.

These are some of the samples we made, some of us using a tjanting tool for the first time!


We brushed the colour on using procion dyes which give a splendid range of hues. 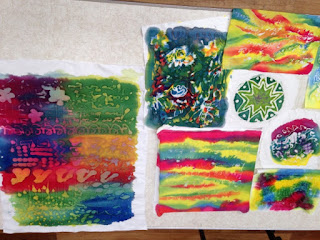 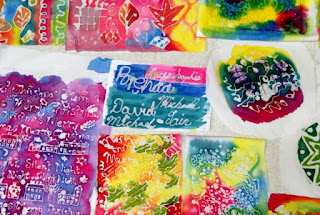 Barbara then got us all sort of doodle a design or pattern in turn on a large piece of fabric, which she’d already brushed random colour onto. The effect was astounding as you can see in this next picture. 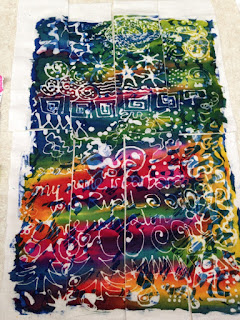 Barbara cut this piece up into smaller rectangles and asked us or I should say directed us to take them home and make them into a finished product such as a card. 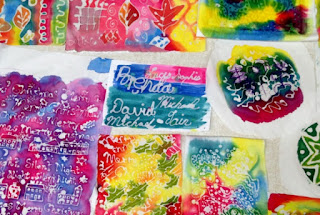 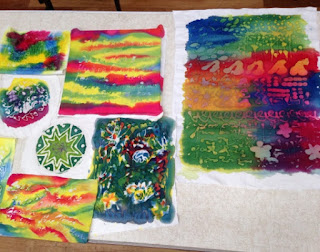 It was great to see the response at our next meeting when we turned up with lots of different things. It’s always nice to see the different ideas  people have.


Some completed pieces.  We made cards, book covers and pictures.

She had a fascinating story to tell of how starting out with a degree in Theatre Design her first job took her into costume making for pantomime. This proved to be quite a challenge, but from here she eventually designed her own collection which obviously looks very “theatrical”. In fact her work was featured in Creative with Workbox edition 148 March/April 2015. As she considers her pieces to be wearable art it was not surprising that her latest venture is called the Thousand Mile Dress. Her aim is to work a 1000 miles across the countryside in different weather conditions and see how it stands up and to raise money in aid of refugees!  Apparently she has already walked many miles in it and we wish her luck achieving her goal. Please feel free to donate.