This time I will begin with the newsletter, composed by our secretary, Marilyn.

This email was received from Kathryn last week
I have just had some bad news via Neil Hitchens -  Charles Gotto the Guild President was killed in a farming accident on Sunday.  This is a terrible tragedy not only for his family and friends but also for the Embroiderers' Guild he was working very hard to raise our profile and promote the Guild's aims.

Don’t forget that Val has set up a blog for Bolton EG at http://begstitchers.blogspot.com/ . Please log on and become a follower.

Also just a reminder that the Guild web address is www.embroiderersguild.com and then enter your username and password which is on the back of your current membership card.

MACCLESFIELD and District Branch regret that their exhibition "Samplings", due to take place from 22 May to 26 June in The Silk Museum, Macclesfield, has been postponed until January 2011. New dates and a new venue will be announced in the Autumn. Meanwhile we regret any inconvenience caused, should members who have seen our announcement in the NW Journal not receive news of this postponement in time and go to The Silk Museum expecting to see our work.

The HARRIS MUSEUM and Art Gallery in Preston - Embellished: The Art of fabulous fabrics, runs until November 2010. Open Monday- Saturday 10am – 5pm except Tuesday 11am – 5pm.

The Theme for the Rose Bowl Competition 2012 was voted on at the Regional Day and will be “Two Peas in a Pod”. The 2011 Theme is “Lights Fantastic” and will be held at King Edward and Queen Mary School, Lytham St Annes 0n April 16th 2011. The Madeira lecture is by Paddy Killer.

The Embroiderers’ Guild is launching a project to produce embroidered postcards for Olympic Year 2012 rather in the style of “Rainbow Squares” Each branch will be allocated a participating country, to be drawn at random. More details later.

Please go and look at our library as we have bought several new books at the Regional Day.

Marilyn refers to the Guild website. Using the appropriate passwords, the e newsletter is now available.[Val}

Ann Christy came to talk to us in May. She was the former IT Rep on the NW committee and supported me in setting up this Blog. Thanks Ann. She then became the Vice Chair but is currently our NW secretary. Ann was asked to present Barbara with her certificate for taking the second prize in Manchester. 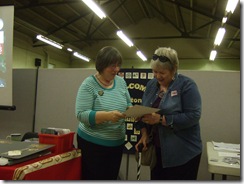 The title of Anns talk was “From a Distance” and could have been interpreted in many ways.  However Ann told us of the joys and pitfalls of distance learning when she studied for her C and G. She demonstrated her IT skills, with a computer  presentation of her work and of course better than this,a display of her actual pieces. We all appreciate those tutors who explain the inspiration for their work and then bring it along for closer inspection