On Friday,1st April ,Barbara and I  set off for the National AGM at Dundee. We had a lovely journey up, sunshine and continual chatter.After a quick change we walked to the formal reception at the City Hall. 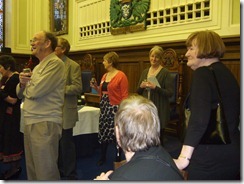 We met up with old friends including three Chairs, Kathryn,Pauline and Betty.

A glass of wine and then a walk to the hotel for an excellent meal. We were seated on the same table as Anthea so there was lots of chatter. After the meal we played embroidery dominoes and then Beano beetle.

The AGM on Saturday went well. There were several reports and time allowed for questions. The overall atmosphere was of friendliness and optimism for our future. Diana Springall was presented with the Broderers prize. 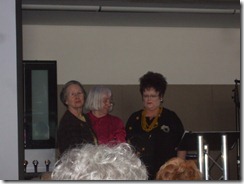 Lunch was provided at the hotel and then we had the option of two more lectures. Barbara and I attended both. The first was Georgina Follett who showed us her exquisite enamelling and later Frances Leonard explained how a branch of the V and A was being set up in Scotland and how students were being taught conservation skills.

There was another formal dinner that evening where whilst sipping wine we were entertained and then piped in by a local piper. 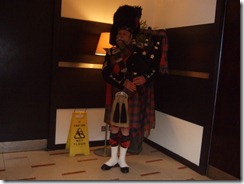 Some of the ladies had made a special effort with their dress. Barbara and I felt quite under dressed. 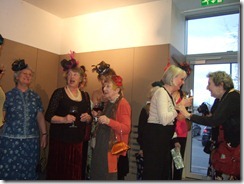 However it was explained that these fascinators had been made at a workshop on Thursday.

Pauline Hannon welcomed us to dinner. Her first job as the new Chair. 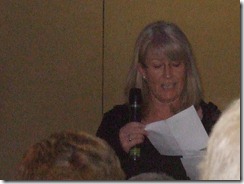 Another lovely meal and then we were entertained by Alistair McMinn who showed us slides about his time in Manila. He then presented Anthea , as retiring Chair with a rose bowl.

On Sunday, Barbara and I went on the organised trip to a jute factory. We returned to the hotel and said our fond farewells to everyone. I decided to travel home over the Forth Bridge as I had never crossed it before. A very pleasant weekend and we are looking forward to the next in Southport.