Out and about,Horwich Resources Centre

Ann asked Barbara and I to represent the Guild at a celebration for the Queens Jubilee this evening. We dressed in 50s costumes and/or red white and blue and arrived as requested at 6.30. The room was festooned with bunting, the tables with union flag tablecloths,napkins and plates. We were shown to a table that consisted of councillors and I sat next to Sue who visited us at The Rivington exhibition when she was Mayor. In the conversation, she mentioned the scissors that we had given her and said what a lovely time she had with us. 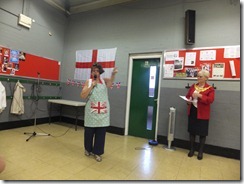 Janet welcomed everyone and introduced the current  Mayor of  Horwich. We were served sandwiches, cheese jam and SPAM[which was really tasty]individual trifles and old fashioned cakes. 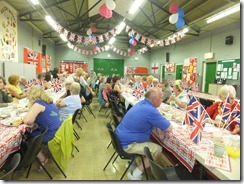 After tea , Janet read our questions for a fifties quiz. Barbara did a lot better than me  but  being a lot older. she had an advantage!!!! { This will tell if Barbara reads the Blog} Anyhow neither of us won. 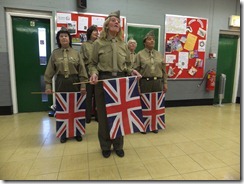 The women's land army then arrived and we reminisced as we sang along to all the oldies.Flags were waved and some guests joined in the dancing. 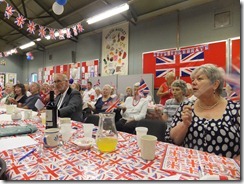 Again both Barbara and I had to explain to guests about the Market Hanging  which looked glorious surrounded by flags and bunting. We were proud to be there to represent you all.