Barbara and I attended the AGM at Cheltenham last week.we travelled down on Thursday so that we could attend the courses on Friday. The Thistle hotel was well appointed and the food served was very good. tea coffee biscuits and cakes were also often available.

We both attended Wendy Cotterils workshop on Friday morning.We played with Zeelan and transfer paints. We will share our new skills at the next play day. 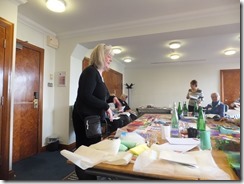 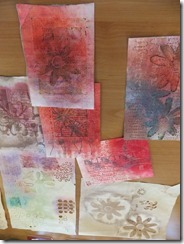 In the afternoon we attended a remarkable talk about the Tudors,by Catherine F lower-Bond and Joanne Briffet.Catherine arrived in a simple shift and was gradually dressed by her lady.I had no idea just how many pins were used to hold the pieces together AND a woman might change five times in a day. She needs to know her lady very well. the clothes brought to the meeting were hand sewn and dyed with natural dyes. It was fascinating. 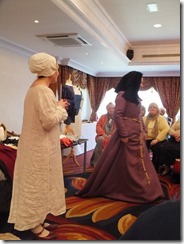 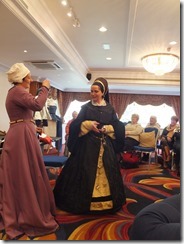 Dinner was a very good carvery and then we were entertained by a shadows tribute band. Jan and jean encouraged us to join in the dancing and the floor was full. i needed to dance away some of my food!!! 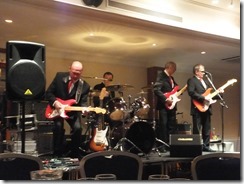 Saturday morning was the Formal AGM. it ran smoothly. several awards were made.The two scholars made presentations. Fees are going up by £2.00pa. The competition for next year was announced. Tree Rhythms.

Barbara attended Angie Hughes workshop in the afternoon. She came away wearing a foiled brooch.I was intrigued by the thought of an hours talk on needles. again it was fascinating.Karen parry described the construction and use of so many different needles and we came away with worksheets and samples.I then met Eliza McClelland who talked about A woman for all seasons. She is an actress with an amazing personality.

There was a Gala dinner on Saturday and I even wore a dress!!! After the meal we were entertained by a choir of 26 Welsh male voices. Quite a change but much appreciated. We decided not to opt for the tour on Sunday so had a very leisurely breakfast and said our goodbyes to so many friends. Jan and jean are looking forward to their visit to our branch next year and send their good wishes. 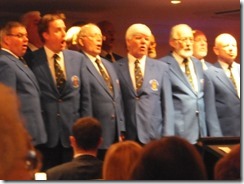