Last night we held the 28th  AGM for our Branch.It was as always, a very busy and unusual night. It began with a required fire drill, good job it had just stopped raining!!!!

Next Ann's granddaughter, Phoebe came along and explained very clearly what it is like to live with diabetes. This year she is an ambassador for Juvenile Diabetes Awareness . Phoebe then drew the winning raffle ticket for our own bag raffle and the proceeds were given to this charity. 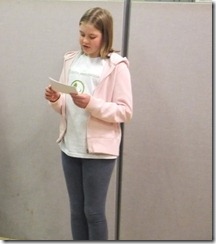 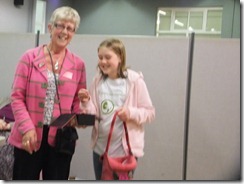 The winner was one of our newer members,Brenda F. pictured  above. 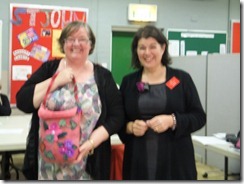 The AGM commenced , reports were given, the committee was re elected and Ann handed over her badge of office to Clare. It was then Clare's first task to present Ann with an orchid plant to thank her for all her work as Chair over the last three years. We wish Clare all the best and know that our Guild is in safe hands.

The evening continued, Ann demonstrating how to make a sari waste brooch and then we all had a go. In addition to this , those who had attended the Lace workshop were asked to say a few words to explain their inspiration and method used for their work. 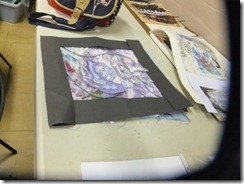 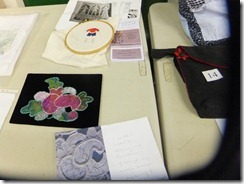 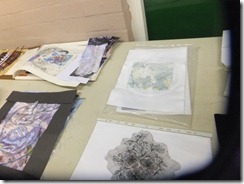 Finally the evening ended with the voting for Molly's cup 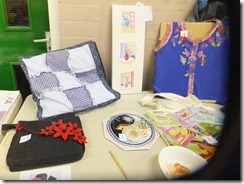 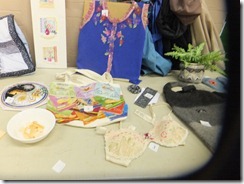 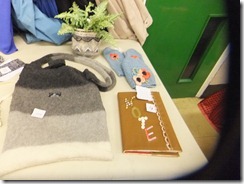 . I was delighted to see that my good pal Pauline had won. Clare was able to present her with our Rose bowl. 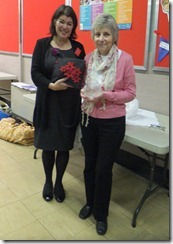 The newsletter was distributed but a few more messages were announced. Our Xmas competition is “An angel” and next years Molly's cup is the technique, “Gold work”. “2014 is our pearl anniversary so Clare invited ideas to make it a year to remember.

Several of us then showed and told what we had been doing during the summer. Jackie brought along the quilt that had won so many prizes recently. See photo on previous pages. However she is now the owner of a brand new Husqvarna sewing machine,redundant to her use. She would like to sell it for £250.00  ono. A bargain.

Finally an apology from me, my camera seems to be behaving badly!!!