It was an exhausting but very rewarding weekend in Colne. Over a coffee and conversation with Charles, months ago, he mentioned that he was considering holding an exhibition. I immediately said that I was interested and that I would ask Bolton Branch as well.

Many conversations and exchange of e mails later and the day arrived. Bolton came up trumps with the requested 30 items and by now I had also mentioned it at Region so had collected 30 more pieces.

There had been a devastating event at Colne earlier in the week so when I arrived , it was still a hive of activity. I put up the remaining items and arranged out tables. I had been able to book the Worlds Longest Embroidery and a kit to make felt hearts from HQ. Both were invaluable and caused a lot of interest. I persuaded both Charles and his granddad to add their stitches. 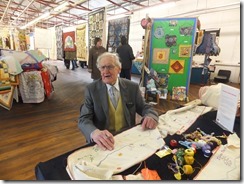 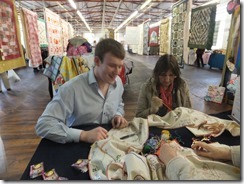 I was delighted with our own wall of embroideries, quite an impressive show. We received many compliments. 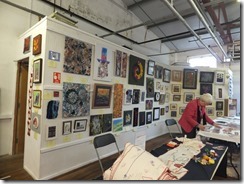 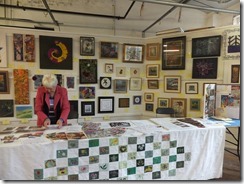 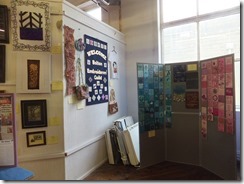 I was assisted on both days by many members from Padiham Bolton and regional committee. We had demonstrations of felt making, embellishing and needle lace  , Whilst making hearts and stitching the WLE we chatted to guests , suggested suitable stitches, threaded many needles and gave advice. 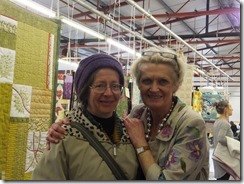 Christine, above right constantly wandered around and made sure everyone was happy I chatted to many Guild members and counted that there were visitors from 17 of our 29 branches in our region.As usual I managed to spend money on more things that I don't really need but might!!!! Be prepared….So when the Drivers have recovered they might well be persuaded to have another exhibition. I hope so.