Months ago, Barbara approached our Guild with an idea. Each year at this time the Lowry outlet holds a display of decorated Christmas trees which are subsequently auctioned off. all proceeds are donated to the St Francis Children's Hospice in Manchester. She thought that we could get involved,making decorations.

The Branch agreed and we decided to limit the colour to silver and white, the shapes to a bird, star and circle . Kits  with appropriate felt beads and ribbons were assembled and we began. The idea was to bring back finished decorations each month but there was some panic when in September Barbara announced that all work must be ready for the following month.

Jackie and Ann had supported  Barbara with the collation of kits so the three of them, ably assisted by Phoebe, Ann's  granddaughter, went along to the Lowry to decorate the tree. There were 120 decorations  on our tree,and members had been really generous donating gifts which were wrapped to compliment the tree and placed underneath. I  believe these totalled more than £300.00 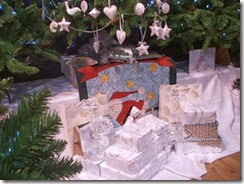 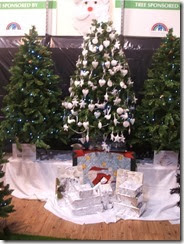 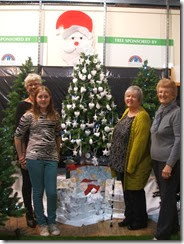 The proud tree decorators, Ann with Phoebe, Barbara and Jackie. I went along a few days later and thought it was amazing. 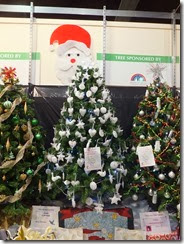 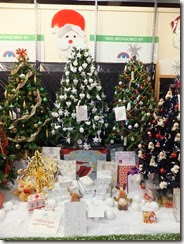 better still there had been two bids already on our tree. £75.00 currently but I would hope for several more bids  before long as the charity is well worth supporting.