Chelford Branch hosted the regional day this year at the Hallmark hotel. As NW Chair I have been quite actively involved but was very impressed by Angela and her team. I had very few sleepless nights and had full confidence in their organisation.

I met some of the team on Friday night whilst Vicki and Jennifer allocated Journals to branches. Access was limited that night so Angelas team had a very early start on Saturday.

The weather was much better than predicted and members were at the doors at 8.30 so I had to rush Vicki and Jennifer from breakfast as they had been asked to act as greeters.

I tried to make the business part of the meeting more informal and let members know Council news “hot off the press” as I was there on Tuesday and Wednesday. We had asked Christine Poole to attend purely as a guest , with no specific job but I did ask her to present 5, 25 year badges to members. I then gave Christine an orchid plant on behalf of the North West. I include this photo just to show off the tablecloth. 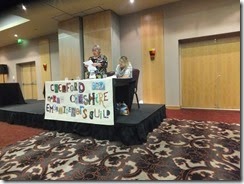 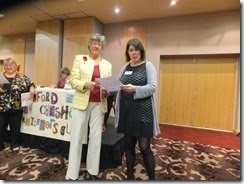 Clare accepting a badge from Christine on behalf of Maureen R,

I was a little concerned about my report , should i read out a trustee report or make up my own. On Friday lunch I put together my ideas and hope that you can appreciate that the Guild needs to move forward and that it is working for us all. Several Bolton members attended the day but I will now include my report and hope it inspires you!!!

I am delighted to welcome you all to our North West Regional day, hosted by Chelford. I have inside information about the plans and am certain we are all in for an excellent day.

The norm is to ask a trustee to attend and this was planned but due to the Constitutional discussion and inherent issues, I decided that we could have a more enjoyable and less political day, if left alone. A trustee will be invited to our business meeting, AGM in October. Please accept my apologies and come and moan to me if you feel that I am in the wrong.

However I cannot ignore these issues and wish to make a few comments, surprisingly positive, about the national AGM and my Council meeting on Wednesday, this week.

· The AGM was attended by over 200 members and the general feeling was very positive. All reports can be seen on the Web. The CEO demonstrated how a Proxy vote could be conducted and the current Auditors were re-elected.

· Flowers were presented to Christine Poole but better still, she received a standing ovation, re enforcing how we all feel about her.

I was not looking forward to Council, after my first attendance last November .I met with a couple of Chairs the night before and we chatted quite candidly about our worries, concerns and thoughts. At Council I did speak more than I had anticipated, raised some questions and landed another job.

· I suggested that the Bonnets made for convict women could be blessed in Liverpool or Manchester instead of or as well as London. This was thought to be a good idea but I must investigate and report back. I know members here have contacts so please speak to me later.

· The Special Resolution was discussed and a shorter and clearer document was provided. Comments for and against were noted. We were asked to sign to say that we were happy to have it distributed to all regions and it should arrive very soon. The CEO did stress that a yes vote was imperative and that a no vote could lead to the Auditors and Bank both leaving us, and the Guild could fold .I am a member of the Guild, not just a sewing club so I report this to you and ask you to think carefully and then DO make a Proxy vote. The CEO is happy for branches to put all votes into one large envelope.

· The EGM on 20 June is for this purpose but there will also be a presentation of future plans. They will subsequently be published on the Web but if you want forewarning then this is an opportunity for you.

· After lunch there was a presentation from 2 members about a Capability Brown project. All branches can get involved in this. At this moment the venue for the North West Region has to be finalised but we will be asked to visit and take inspiration from the landscape, building but of course especially the gardens. Pieces will have a common size and hanging but details will follow soon.

· The one day AGM pattern went well and this will continue for the next 5 years, moving up and down the spine of the country. However those of us who enjoyed the weekend AGM will have the opportunity of new 3 day events similar to our Summer School.

Closely tied in with the Capability Brown Project, branches were recently invited to get involved with a project at Ordsall Hall. On your seats are a couple of leaflets explaining what is happening and I have packs to distribute to branches who have agreed to join in. Further packs will be available as more people sign up to have their names added.

We have orders for almost 200 Journals. I must publicly thank Sandie Maher for all her work as Editor. Having been heavily involved myself, this year, I realise that she must have the patience of a saint. Please try to stick to deadlines when submitting work. We hope you approve of the price slashing and I would hope that if we could encourage new advertisers and a bigger circulation we could eventually give the Journal for free. There are copies available for branches, and individuals who have yet to purchase.

Sue has brought boards and details about Summer School this year. Places are still available. In a way this bothers me as it was not many years ago when places were heavily competed for. We have not confirmed tutors for next year so please tell us who you want and what techniques you want to develop. It’s a great weekend both from the skills aspect but also the socialising with members. I would hate to be the first chair to cancel a summer school!!!

Do you know about the talk given by members about our Collection? Again this was brought up at Council. I need volunteers who after training and with a full set of notes and a DVD, have the confidence to talk to branches of our Guild but also WI groups, Probus ,flower arrangers, churches etc. Please think about adding a night to your calendar as branches only need to cover the speaker expenses. I will take volunteer names today.

You might have heard the news that North Wales branch put in a request to re-join the NW region. The trustees have agreed this and so I am delighted to welcome them. The notice was too short for them to attend today.

I would now like to announce a Chairman’s Challenge. I have three ideas to cover my tenure and hope that it will make us a more cohesive and stable region.

Comprehensive instructions will follow but the idea is based on travelling books. I have purchased A3 pink pig books and each branch is allocated 2 facing pages. The left is for inspiration, drawings photos notes etc and the right for a stitched piece or pieces. Branches can work together or a small sub group or even an individual but the theme is YOUR BRANCH LOCATION. They will then be passed on to me and available at NWR days , NWR AGM and on loan for exhibitions. I hope you approve and will get involved. I would like these pieces ideally by end of Sept so they can be seen at our AGM in Oct. Tied in with this , we have also decided to” double the day”. Why travel for just an AGM, come for a full day and there will be an afternoon activity to enjoy.

I’m sure that there is lots more to tell you but I am conscious of the time limits, Please approach me anytime during the day with concerns questions or comments. Otherwise I am always available at the end of a phone line or laptop.

The morning speaker Carl Wilde made me ache with laughter. He only wears Vivienne Westward well that it when he is wearing something!!!. Ask those who were there…he was very indiscreet about society members and then put on a pair of VW high heeled shoes. His talk was really about the wonderful tailoring skills of Vivienne and this he illustrated with about 20 of his suits, shirts kilts scarves etc. 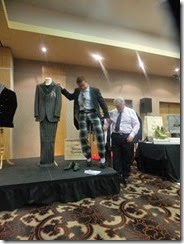 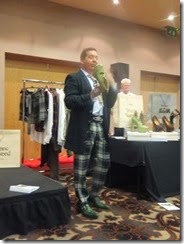 I had chicken and leek pie with fresh veggies for lunch followed by some lemon pudding. Delicious and I was given sufficient time to actually sit and eat it. I believe I missed out on coffee and pastries in the morning.

There was a full range of shops, a free raffle and then a raffle where books were given and a kit of materials that went with a challenge in the book. A very interesting idea but sadly  Ididnt win. However Barbara was more lucky than me. I must see which book and kit she won. The competitions were judged and certificates and gifts sorted. Chelford had also managed to put on an exhibition of their work, that could have been a stand alone exhibition. Masses of wonderful works of art. 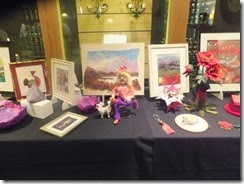 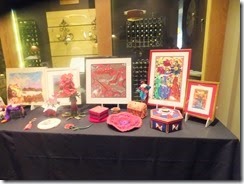 We come to the afternoon speaker Louise Gardiner. She had had a busy time,setting up her slides and started with a glass of sherry.You can imagine then, her talk. Like many I had heard her before in the North West and she did show some of her earlier work but she then spoke of her more recent ideas. She also explained how she tried to make a living as an “embroideress. ”Chelford are very proud of Louise as she is a local lass and she did them proud, too. An honest and amusing lecture ready to inspire us all. 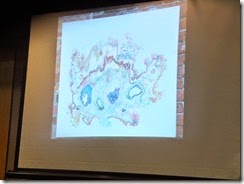 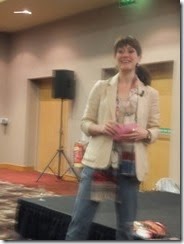 Louise had judged our competition but offered to present all of the awards. The day was then over, refreshments were ready and then members drove home, Im sure inspired and very happy with their day. WELL DONE CHELFORD. Next year , its us again and we have a high standard to maintain.