Out and about : North Wales

Its been a hectic few days. Regional AGM on Saturday then 2 days down at Walton on Thames I nearly wrote London , but as it takes a tube and train out of London to get to HQ , its a long way. Council is quite an intense affair and The NW Region was mentioned several times , maybe due to the questions that I had sent after our AGM. I was ready for a change and the happier part of being Chair.

Once North Wales had re-joined us, I made contact and was invited to their next exhibition. At the time I didn't realise that it would be at so busy a time and worse  that this , the day of the  World Rugby final.Friday night weather forecast suggested fog so I was delighted to see a fairly bright sky on Saturday.  I picked up Barbara and drove down. The roads were quite clear and with the by pass, the journey took just one and a half hours.

I was expected and they found Moya to greet and introduce me. It was a lovely welcome but we needed a cup of tea first!!! we were also offered cake but refused. We really wanted to move into the main room and see the exhibition.

The church is beautiful  and the arrangement of exhibition pieces was imaginative and well designed. I learned that the branch owned all the stands,tables and lights and they were 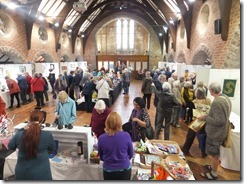 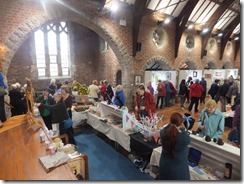 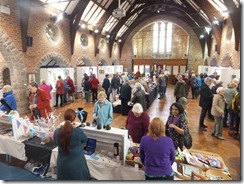 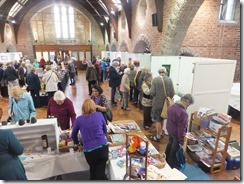 held in storage when not used.

I chattered to many members of both the committee and members. They were extremely friendly. I had a difficult job though, trying to decide my favourite piece for the visitor vote. Barbara and I had differing ideas and Barbara wanted a second vote. We were quite sad to leave as we had both found it to be a more than pleasant activity. On the journey home , we discussed what we had seen, the decided that we should visit again soon. Better still, I arrived home in time for the final and saw Nez Zealand thrash Australia!!!!