Out and about Chelford

Saturday was not a very bright and sunny day when I set off with Barbara for the Chelford Exhibition. At Alderley Edge the road was closed and after a detour arrived back at the same place. We had caught up with the May Day fete so engine off we watched  and listened to the rest of the parade. We were beckoned on behind the parade as it moved into the park but then met another road block. Some crazy driver decided to overtake me to be closer to the roadblock...why? So when we arrived at Chelford, I was frazzled. Sibylla was in the carpark at that moment so suggested that we parked and blocked  her, as she would be the last to go.
The welcome was lovely, the exhibitions worth our time and a difficult task, trying to choose our visitor vote. We ate refreshments and chatted to so many faces that I recognise. Just wish I was a bit better at remembering names. I spent more that I had expected at the wide range of stalls and even won a bottle of wine in the tombola. Merlot , my favourite , and some still left for tonight.
On Friday I had specially charged my camera but for some odd reason did not take any photos. However Ruby Porter was there again and as always sends her greetings. Her tabled raised over £200 for the orphanage so when she sent me a photo Im sure she wouldn't mind if I used it. She also mentioned an exhibition coming up in the future and she will send me details to advertise on the NWR Blog. 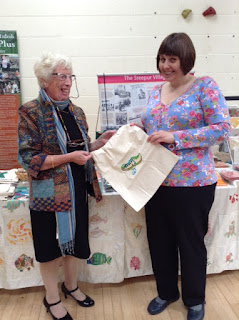 Our journey home was much easier but the weather had really deteriorated and we went through very heavy rain and some floods. We were very sad to think how the Fete was surviving. Travelling to meet other members in other branches is one of my favourite activities. Make the job so much more enjoyable.