Barbara and I booked for a weekend package at Southport this year. We took the easier option of staying at the Ramada Hotel attached to the Southport Convention Centre and later I was so pleased that we had made this decision.

Monica had asked me to oversee the Raffle, so we had to arrive very early on Friday morning. The Raffle was a great success, both in the number of compliments,tickets bought and distribution of prizes. I could not have managed without the help of Barbara. We were constantly busy and had two separate raffles on the two days. Having stored the bags at my home and then in our bedroom, I had been able to admire the exquisite workmanship and generosity of NW region, Branches who had donated these bags. Even better, on Saturday, one of my numbers was drawn and I won the turquoise bag from the Wirral. Was I happy!! 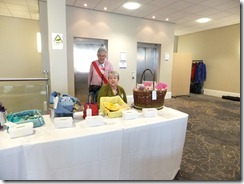 At the start of the day, Friday, I rushed downstairs to see the Postcards. I grabbed my camera and tried to take photos before the masses arrived,but was overwhelmed by the number. They are amazing. Terry our CEO is investigating the possibility of a catalogue so I have my fingers crossed, Spot Bulgaria below…. 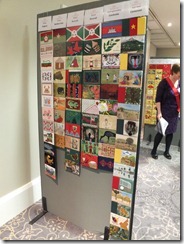 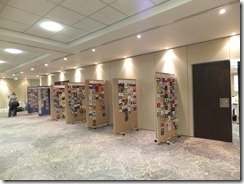 Barbara and I had not booked the workshops offered on Friday but I believe they were much enjoyed. In fact they were over subscribed so Sarah from Golden Hinde stepped in and offered two more. 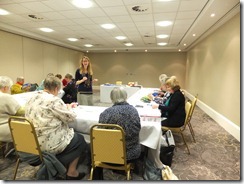 There were  also two opportunities to visit the Lady Elisabeth Hoare collection at Liverpool Cathedral but of course we had been before.

We nipped out to an excellent tapas bar for a quick lunch and breathe of fresh air and continued to sell tickets. Dinner that night was in the hotel, a Carvery but excellent. After the meal we were entertained by A old friend Rubina Porter MBE. 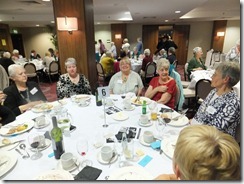 She gave another entertaining but thought provoking account of the orphanage in Bangladesh. 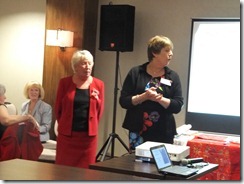 Saturday was the formal AGM. We began by greeting our new Presidents, Jan Beaney and Jean Littlejohn who then conducted the meeting. 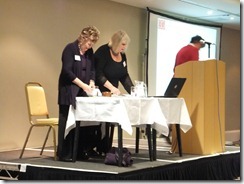 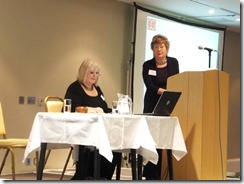 There were several awards made but I would like to check names etc. before I publish this. However Katherine our former NW Chair was acknowledged for her work both in the Region and in organising the AGM., and presented with a glass paperweight.

Lunch and then two lectures.  Linda Barton told us about”Spinning a golden yarn” and then Bridget Guest, about the “Quaker tapestry”

We mat in the Conference centre at 7.00 for a drinks reception followed by our Gala meal. IT was then “Double Trouble” as Jean and Jan entertained us with an account of their lives and loves of technology.

Monica presented Katherine with a hand made book of photos to thank her for her Chairmanship and then those of us on the committee that had been closely involved with the AGM were presented with engraved scissors by Christine Poole our National Chair. Another surprise for us all, but very welcome.

Sunday offered a leisurely breakfast for some of us. No bags to move or raffle tickets to sell. Barbara and I sat and chatted amicably over bacon and eggs   with Jean and Jan.We watched a coach disappear to the next visit, The Rachel Kay Shuttleworth collection at Gawthorpe Hall and packed our bags. A walk down Lord Street and then a journey home. We were both exhausted but content. Next year at Cheltenham will be a little less stressful for us!!!!