Out and about again

On Friday, Ann Barbara Judith and I set off for the Storey. Lancaster. We had volunteered to steward the NW Regional exhibition. We arrived promptly and after a quick coffee, opened up. Im sure the other three were genuinely impressed with our exhibition. I know I am. In fact Clare phoned tonight and also said how much she had enjoyed it. You have a few days left if you wish to call.The railway station is minutes away. We were not very busy but chatted to the visitors whenever they arrived,We encouraged them to add to the Worlds Longest Embroidery. 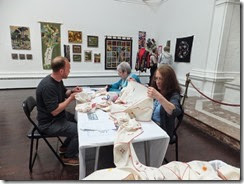 as seen above. This poor guy was an art student and after trailing around with me possibly thought that he would escape….but he met Barbara and Judith!!!At lunchtime we were surprised to see Mary arrive.Another Bolton Member so as Brenda and Carol had stewarded earlier in the month, Bolton was well represented.

The afternoon was dire, we had all brought stitching just in case but Barbara began her “record”,,,,assisted by Judith and Ann, they made the worlds longest running stitch line, 13 metres on Friday 13th. 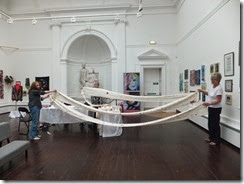 There was much thought and activity in preparation for this exhibition. Do call by Saturday.